Saleem is Artistic Director of the Galilee Chamber Orchestra, and works with the orchestra both as conductor and soloist. In the summer of 2019 he led the orchestra on a highly acclaimed German tour that took them to Berlin Konzerthaus and the Rheingau festival among other venues. 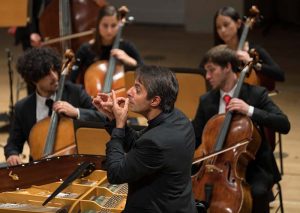 In past seasons Saleem has conducted the Jerusalem Symphony, the Bergen philharmonic, Salzburg Kamerata and the Potsdam Kamerakademie .

The upcoming year, he will conduct the Leipzig Radio orchestra in a pure Schostakowitch program as well as the Berlin Konzerthaus chamber orchestra.

He will lead the North American debut of the Galilee Chamber in New York’s Carnegie hall and Toronto with Joshua Bell as soloist.

Saleem’s most recent recordings have been for Decca Records. They have released the Mendelssohn Piano Concertos with the Leipzig Gewandhaus and Chailly and two Beethoven Concertos with the NDR Elbphilharmonie and Ivor Bolton. Saleem is also recording the complete Beethoven Piano Sonata cycle for Decca, the first 5 volumes of which are already released.